Among the more important recent economic news is the record hike in Germany’s producer prices, which makes analysts worry that consumer price indices are yet to rise even faster. Given that, in this article we look at the connection between industrial and consumer prices in Bulgaria in an attempt to determine to what extent the industrial price index can be used to forecast the future dynamics of consumer inflation.

To do this, we compare the values of both indices – on the one hand, the total producer price index, and on the other – the harmonized index of consumer prices. The reason for using the HICP instead of the more widely referenced Consumer Price Index is mostly convenience since both the HICP and the producer price index take 2015 as their base year, which allows for direct comparison without recalculation.

The time frame we use is from the beginning of 2005 until July 2022 since this is the most recent available data. We could track the HICP even further back, but the National statistical institute has been publishing the producer price index only since 2005. 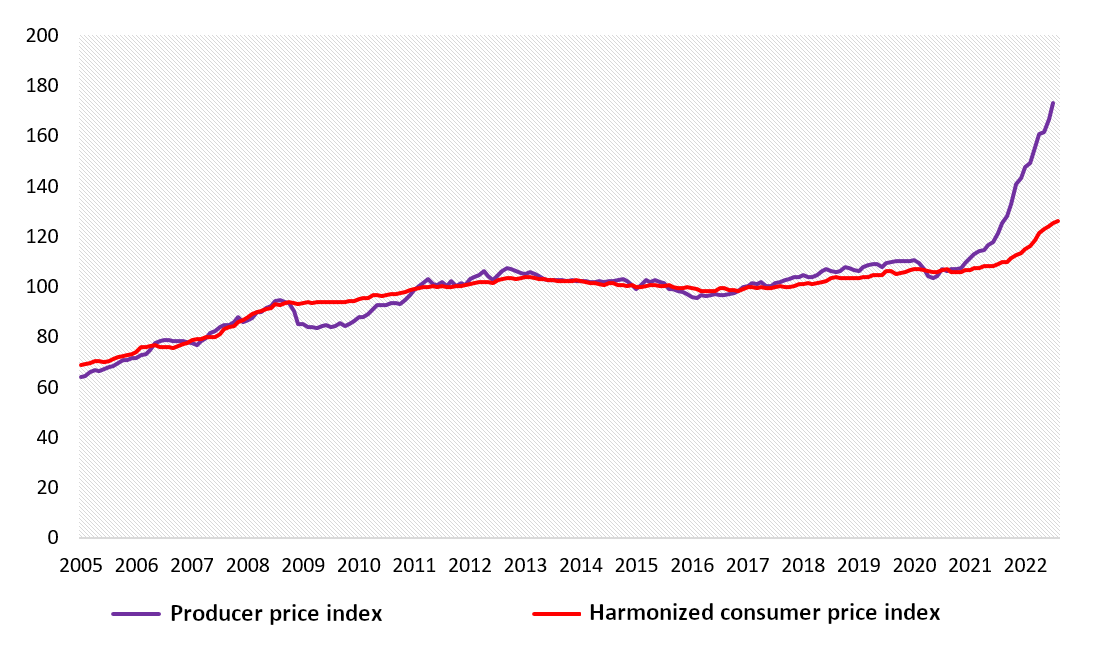 Even at a first glance, it is visible that the two indices almost coincide during the last 17 years. Naturally, there are some differences – for example, before the Global Financial Crisis from 2008-2009 consumer inflation is firmly higher but then after 2010 producer prices rise faster. Nevertheless, during periods of growth both indices are closely linked to one another.

Things, however, are different in times of crisis when the ability to accurately predict the dynamics of consumer prices for the next couple of months or even quarters would be especially valuable for the needs of macroeconomic planning. However, the chart shows that in times of longer downturns the connection alters. Moreover, its behavior was different in the last two big crises. In the period 2008-2011 producer prices marked a significant drop while consumer prices continued to grow.

Conversely, since the beginning of the Covid-19 crisis in 2020, industrial producer prices have been skyrocketing, while consumer inflation needed some time before it started its rapid climb up. A possible explanation is the ability of the producers and retailers to absorb some of the price rise of materials and production items by reducing profits to keep their market share and soften the price shocks for consumers. Imports are also important here, given that they can have a dampening effect on overall consumer inflation.

Up until now, we have been looking at the simultaneous change of both indices. However, to derive some forecasting value from this analysis, we need to see whether changes in the production price index precede those of the HICP. Therefore, we compare both indices, but we add lags of three and six months respectively to consumer prices [See: Figure 2].

Figure 2: Interaction between the producer price index and the harmonized consumer price index in Bulgaria with a three-month and six-month lag [2005-2022, 2015=100]

Even without adding the time lag, the correlation between producer and consumer prices is very strong (r=0,91). After the lags, the link is even stronger, especially when implementing the six-month delay (r=0,96). Put differently, it takes roughly half a year for the rise in producer prices to be noticed in consumer prices as well. If we use longer lags, say nine or even twelve months, the correlation gets weaker.

Of course, such an approach could be used in analyzing price changes of different product groups. However, given that comparing the dynamics of certain components of the two indices is often ambiguous and sometimes even impossible, such analysis would go beyond the scope of this article. Due to the open nature of Bulgaria’s economy, it would be useful to also track the influence of price dynamics of certain key important goods like foods, clothes, and fuels.

Nevertheless, what we have seen here is that the movements of producer prices are a very good indicator of future consumer inflation (we must say here that as we potentially enter another economic downturn there may be some discrepancies caused by this crisis itself).

This means that producer prices have an important place among the tools for short-term macroeconomic forecasting and are key for determining the direction and probably also the speed of the rise in consumer prices, which have been at the center of all economic policy discussions in the past few months. Will Efficiency Be Curse in EU?