There are undoubtedly many factors that determine how individual governments dealt with the COVID-19 pandemic. However, one of the main aspects that has determined the success of mitigating the health impacts of the pandemic is the level of public trust in government institutions, as noted in numerous scientific publications. How much (or actually how little) the Czechs trusted their government during the most difficult periods of the pandemic compared to other EU countries?

During the critical periods of the pandemic, governments were forced to implement a number of security measures that fundamentally affected the daily lives and freedom of the population. However, the public’s compliance with these measures depended heavily on the trust they placed in government institutions.

In the case of weak trust, government institutions are usually forced to resort to more severe repression, but this can only be effective to a limited extent or in the short term. Moreover, positive perception of trust in government institutions was mainly influenced by the ability of effective and reliable organization, clear communication of pandemic-related information, or the perceived degree of fair and honest behavior by the government representatives.

As shown in the regular Eurobarometer survey from the turn of 2020/2021, trust in the Czech government has dropped from 40% (before the pandemic) to 19%, placing the Czech Republic in the last position among the EU countries. Satisfaction with security measures was also weak, at 24% (the third lowest in the EU). Another survey by OECD also recorded declining levels of trust in the Czech government during the first wave of the pandemic, with the Czech Republic at the tail end of the list of all measured countries.

However, the results of these surveys also correspond to the events that took place in the Czech Republic during the pandemic. The Czech government institutions acted in a very chaotic manner – frequent changes of leadership in the Ministry of Health (four different Ministers within one year!), incomprehensible communication of safety measures, problems with the supply of medical equipment, a complete lack of emphasis on the vaccination campaign and the complete absence of a conceptual and systematic information campaign against the most common misinformation.

Consequently, the Czech Republic performed far below average in the EU in terms of overall pandemic management and mitigation. In particular, in the number of deaths related to COVID-19, the Czech Republic ranked among the worst Member States with a number of deaths exceeding 370 per 100 000 inhabitants (more than 40 000 deaths). Within the EU, only Croatia, Hungary and Bulgaria have higher relative death rates.

Similarly, the proportion of the population with vaccination coverage is approximately 64% in the Czech Republic, compared to an EU average of 72%. In the notional vaccination coverage rate, only Bulgaria, Croatia, Romania, Slovenia, Slovakia, and Poland are behind the Czech Republic. On the other hand, Finland, and Denmark, for example, which received relatively high public support in the same survey, have almost the lowest death rates.

As in other countries, many people in the Czech Republic still do not believe that the COVID-19 pandemic has not caused significantly more deaths than under normal circumstances. Perhaps the graph below showing the weekly evolution of the number of deaths will help them to change their mind.

The green curve represents the long-term average (2015-2019), the brown one illustrates the development in 2020 and the blue one represents year 2021. It is therefore quite evident that during the most critical periods of the pandemic, almost twice as many people died in the Czech Republic than under normal circumstances. 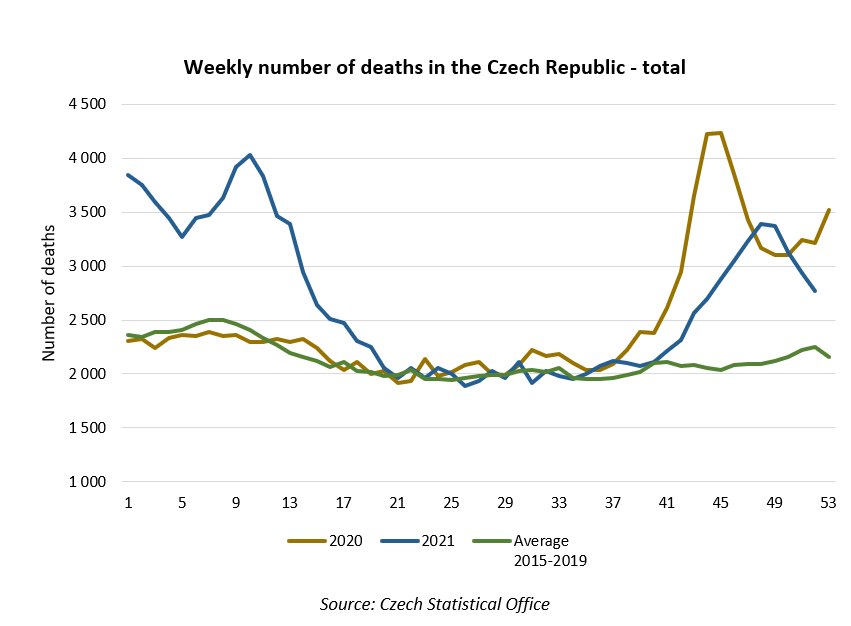 Marshall is coming back to Europe, where British argue with French about banking rules and Greeks want to place mines on the borders. Even though...